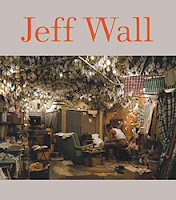 On Thursday night, I went to see a sold-out artist’s talk by Jeff Wall at SFMOMA, where a retrospective of his work has just opened. His is work that has never grabbed me visually on its own, but when words are added to his images they come to life in a new way. He is very much a conceptual artist, well-versed in art history, theory, and criticism, and his work is deeply informed by this. One of the very interesting things he has done is to make pictures that are more connected to the traditions of painting and even cinema than to the history of photography.

Wall describes his process as “disciplined improvisation” and “near documentation.” For example, in A Sudden Gust of Wind (after Hokusai) from 1993 (which you can see on the SFMOMA web site), he composited 75 photographs, combining them digitally to re-create his own version of a well-known painting. He scouted out the proper landscape, hired actors to perform for his camera and spent long stretches of time photographing each element in the scene. Wall does all this labor-intensive work to create just one final image. But for him, it is because of all this effort, that the one image he does make has (what he hopes is) staying power on par with great 19th C paintings.

I enjoyed his conversation about accident, which plays a crucial role in his work. As he said, “Every starting point is an accident…I’m always surprised…Accidents stacked on top of each other are necessary for something to happen.” In A Sudden Gust of Wind, it was the accidental smile of the twirling figure in the center that changed the whole sense of the photograph. Wall took 300 shots of the twirling man alone. It was after having spun many times, that the twirler’s smile emerged probably in light of the absurdity of repeating this action again and again. Yet for Wall it was the crucial element for unlocking the mood of the whole piece. Prior to his talk, I had always viewed Wall’s work as tightly controlled, but now I am intrigued by his sense of serendipity. As an artist, what I take away from his lecture is a reminder that you just have to collect your tools and props and get started and let the accidents happen that lead you to the best possible picture.

To learn more about Wall, you could read a nice piece from the February 25th NY Times Magazine by Arthur Lubow. His exhibit at SFMOMA is up until January 27, 2008.