The Wolf Who Ate the Sky 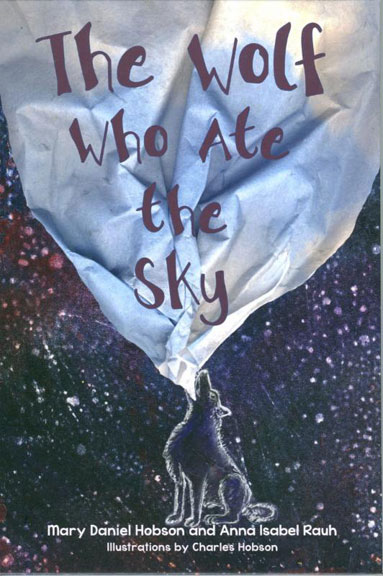 When my daughter, Anna, was 3.5 years old, we created this story together during car rides to and from preschool – telling it again and again, until it grew into the story that now appears in this book. My father, Charles Hobson, enlivened the story with his illustrations. This three-generation project was published by Heyday (Berkeley, CA) in spring 2015.

From the Heyday website: “Once upon a time there was a wolf who was so hungry that when he went to bed he said, “When I wake up, I am going to eat the first thing I see.” The next morning when he opened his eyes the first thing he saw was the sky, and guess what happened next…After the world goes dark, a brave boy, along with a menagerie of other animals, decides to confront the wolf who ate the sky. This utterly charming and mythic tale was created by Mary Daniel Hobson and her young daughter Anna. Accompanying the text are dreamy, evocative illustrations created by Anna’s grandfather Charles Hobson.”

To learn more about how this book was created, please read this interview with me and my father by Mariko Conner at Heyday.

Signed copies (of this out of print book) are available from my studio for $20. To order a copy, please contact me.

Below is the book trailer video which features Anna at 3.5 years old telling a version of the story.