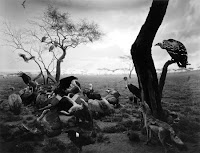 I recently went back for a second look at the Hiroshi Sugimoto exhibition at the De Young Museum. One of the things that really struck me this time was the wide range of dates within some of his series. For example, in his dioramas (one is pictured here), Sugimoto shot some as early as 1975 and then some as late as 1999 (more than 20 years later) – the exhibit features some from 1980 and some from 1994. As an artist, I often feel a certain pressure to create a series, complete it, and move on. But I love the idea that there are series you work on, put aside for awhile, grow something new, and then come back to it and flesh it out further. There is a certain freedom and permission in that way of working that really honors the organic nature of the creative process.

There is a lot of great information online these days about Sugimoto. One of my favorites, is an audio interview with Sugimoto by Tania Ketenjian of Radio Tania. I liked Tania’s intro in which she describes how for Sugimoto “photographs are like a time machine…a way to document and recreate memory.”