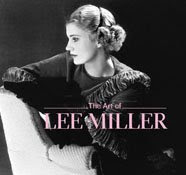 I took a family excursion to SFMOMA on Friday evening with my father, daughter, and husband to attend a Foto Forum walk-through of the new Lee Miller show. It was such a treat to see so many vintage prints by her. I wrote my undergraduate thesis on Lee Miller and relied heavily on books for my view of her photographic oeuvre. Now at SFMOMA I could view the wonderful subtleties in her prints. I drank them in, filling my creative well.

The walk-through was led by curator Marc Haworth Booth and Lee Miller’s son, Antony Penrose. They each animated the images on the wall with background stories and information. For example, the photograph below is a wonderful surrealist image of the magic electricity found in the everyday occurrence of opening a door. Marc Haworth Booth explained that this was a door to an exclusive shop and that the explosive illusion came from light hitting the marks left by the diamond rings of wealthy women scratching against the glass as they turned the handle. I have always viewed this image as articulating the power of the hand to ignite the creative spark that generates new art.

It is hard to consider Lee Miller’s work without connecting it to stories from her multi-faceted life. Born in Poughkeepsie in 1907, she modeled for Vogue magazine, was Man Ray’s mate/muse/assistant, ran a portrait studio in New York City, married an Egyptian and lived in Egypt for several years, then became one of the first female war correspondents during WWII, and after the war married Roland Penrose and settled down in the countryside raising her son and entertaining artistic friends like Picasso and Max Ernst. The rich variety of her life caused her son, when writing Lee’s first biography, to call it the Lives of Lee Miller. I have recently been enjoying Lee Miller: A Life and the catalogue for the exhibition. 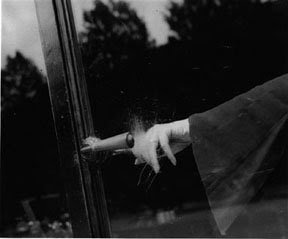 It was a treat to see this show with my father, Charles Hobson. When he created his book, Parisian Encounters, about eight famous couples who met in Paris, he included Lee Miller and Man Ray, recounting the story of their first meeting. Lee Miller was traveling in Europe and decided to stay in Paris and study with “the best photographer in the city,” which at the time was Man Ray. So she went to his studio and rang the buzzer, but the concierge informed her he had already left for his summer holiday. Crestfallen, she went around the corner to a café, and finding him seated there, she marched right up to him and introduced herself, saying “Hi, I am Lee Miller, your new assistant.” He countered, “I don’t take assistants, and anyway I am leaving now for my vacation.” She said, “Fine, I am coming with you.” And she did and so began a rich collaboration.

It was stories like these that inspired me, as a student at Vassar, writing my thesis on Lee Miller in Poughkeepsie (the city where she was born), to really go after what I wanted in life. If, at a time when women most often defined themselves as mothers and wives, Lee could burst through limitations and live such a full, animated life, then so perhaps, could I. She helped me dream bigger and commit myself to the path of photography. When I began my series Mapping the Body, it was her and Man Ray’s vision of the cropped female figure that informed the way I photographed my own body – mining inspiration from their vision to create my own. In the end, I think there are people who touch you through time, despite death and never having met. Lee Miller is one of those intangible mentors for me. It’s why seeing her show on Friday filled me with that magic electricity of exploding hands.